On Saturday the 21st of July 2012, Margaret Sampson George spoke for the Quilt Study Group of NSW about Medallion or Frame Quilts. There were 68 in the audience in the Target Theatre at the Powerhouse Museum who came to hear Margaret Sampson George talk about her introduction to sewing and quilting, her love of medallion quilts, examine some quilts in detail and then to see examples of her work and her students’ work. Margaret discovered quilt making through her contact with the craft magazines that her US service wife friends read when living in Alice Springs. After making her first quilt, a log cabin, and then moving to Penrith, she and a friend enrolled in a patchwork class run by the Embroiderers’ Guild of NSW. The teacher, Audrey McMahon, allowed them to make 4 blocks, instead of a glasses case, and introduced them to Avril Colby’s “Patchwork” (her bible still) and the Lady's Circle Patchwork Quilts magazines and the Quilter's Newsletter Magazines. 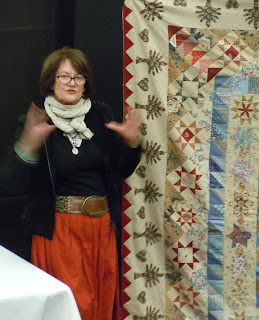 A year later, she started teaching but saw there was a need for commercial suppliers of metal templates and quilting frames. She encouraged a local company to make these – thus beginning the successful start of JH Bonwick & Co’s quilting products manufacture. Now Margaret teaches whatever people want to do – “repeat blocks are not me”, she said. This is why medallion quilts have interested her – they are quirky, eccentric and traditionally are not made from a pattern but evolve. Her detailed examination of Joanna Southcott’s quilt (http://www.rammtimetrail.org.uk/#/period-17//object-1011) which was stitched in the centre with her own hair, best exemplifies what attracts Margaret’s interest. 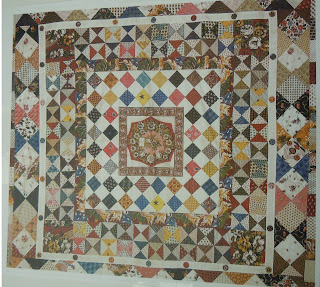 Margaret then discussed the historic reasons for the popularity of medallion quilts, the development of fabrics from the 1500s onwards (especially the quilt centres based on pastoral, floral, military or commemorative panels) and the importance of medallions for commemorating important dates in the makers’ lives (such as the New Zealand Martha Quilt – see the story of this wonderful quilt at - http://roxborogh.com/Marthasquiltimages/565K%20Martha%27s%20Quilt%201%201%2007.pdf).

She finds it wonderful that there are no two identical frame quilts yet found and loves the odd ones – those that are not “oversized mathematical behemoths”. She doesn’t believe that there is a mathematical formula applicable but can see how the Fibonacci principles could help when designing the width of the frames. She now loves renovating her centres to take advantage of new, brighter fabrics. 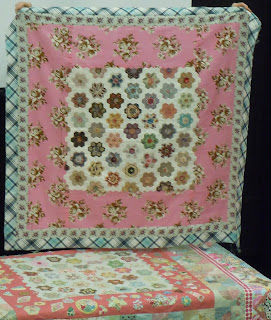 Margaret then took us through her quilts and those of her students. She started with the One Day Quilt she made in 1992. 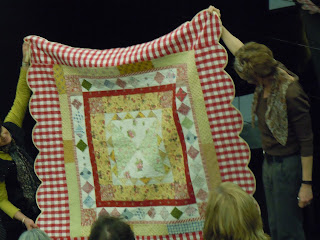 This is her 'Not the Levens Hall' quilt. 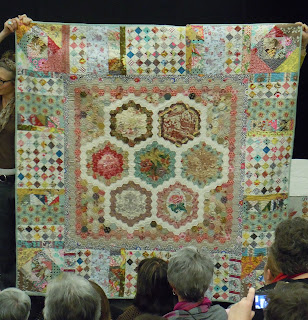 Here are 2 centres inspired by the Jane Pizar Irish medallion quilt which is held at the Cheltenham Museum. The original can be viewed at http://www.bridgemanart.com/search?filter_text=pizar&x=0&y=0 (Barbara Brackman has a more detailed examination of the quilt on her blog). Marg discovered the quilt when she saw an ad for the museum in an 'English Country Living' magazine. The first example was made by one of Marg's students and the second one is Marg's version. 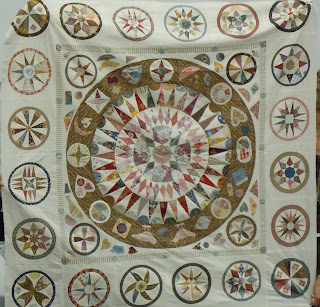 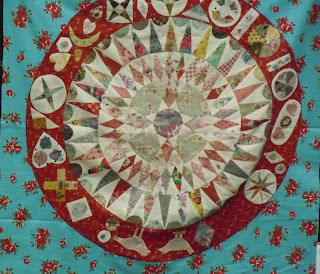 And this is the medallion quilt she made from available fabrics and sewed under the curfew during the coup when living in Fiji. 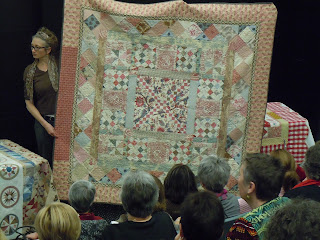 Margaret then shared a number of quilts her students have made including some made by Gay Drummond and Maree Spencer, who were in the audience. Thank you for letting us see your wonderful quilt tops. 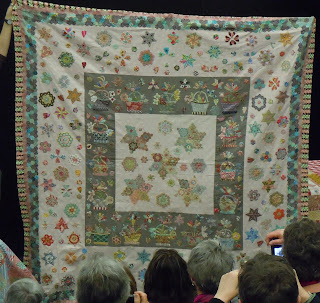 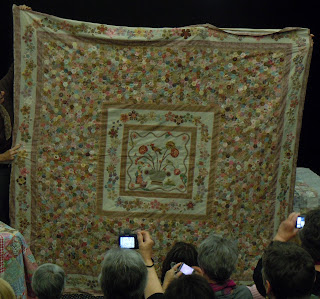 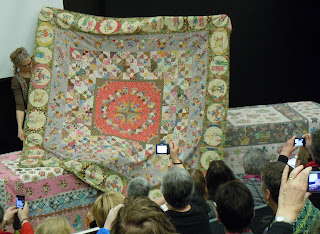 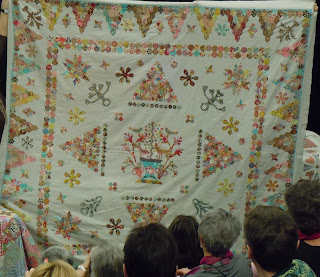 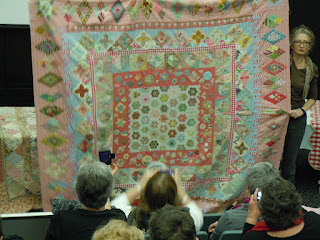 And this is the last quilt Marg showed us. A group of her students made it for her. She never uses Visoflex, so for fun they used it when making the blocks. 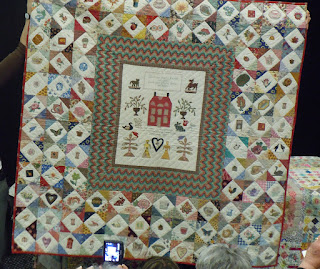