Judy Hooworth gave an extensive talk to the QSG of NSW at the Powerhouse Museum in May. She broke the talk into three topics. The first section of her talk covered the history of ‘The New Quilt Exhibition’. The second section covered the thoughts and recent works of selected current contemporary quilters who have exhibited their works in ‘The New Quilt’ exhibition or its successor.
And the last part of Judy’s talk was the story of her quilting journey. 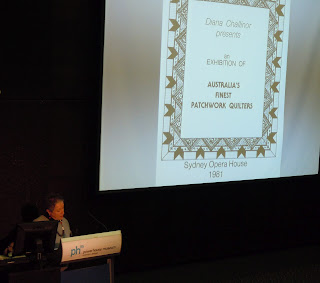 Quilting really took off in Australia in 1981. By the time Judy Hooworth and Anna Brown were on the Guild’s committee in 1992, they knew that recognizably Australian quilts were being made and it was time to also see quilts as ‘works of art’, not just as bed coverings. The committee accepted their proposal to start ‘The New Quilt Exhibition’ to showcase such quilts, so they took some of their own representative quilts to a list of museum and art galleries to gather support. Michael Pursche, then director of the Manly Art Gallery and Museum (and who was also in the audience), agreed to provide the venue for the exhibition. The benchmark for the first show was USA’s Quilt National, and the first catalogue produced for The New Quilt Exhibition has ensured continuing recognition of the event. Judy showed us the cover of every catalogue produced and took us through the themes and notable developments shown by quilters at each exhibition. She noted that while one third of the entries in the first exhibition had some surface design and two thirds used commercial fabrics, in the most recent exhibition 15 of the 19 exhibitors made their own fabrics. She encouraged all of us to submit proposals for future exhibitions because it is important to our work to ask ourselves three important questions: ‘What are we making? Why? And what have I made before?’ There are no prizes given but the reward is the privilege of being accepted into the Exhibition. Judy’s final piece of advice: ‘Take courage to submit a proposal’. 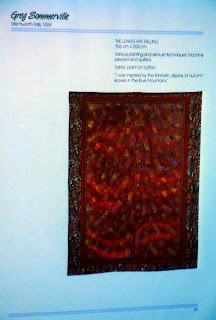 For the second section of her talk, Judy approached quilt artists who had exhibited in The New Quilt Exhibitions and asked them to provide her with digital images of their recent and earlier works, and to tell her what was the highlight of their career so far. It was remarkable to see how their quilts had changed and to hear the highlights. Those who responded included Yvonne Line, Barbara Macey, Pamela Fitzsimons, Alison Muir, Alveena Hall, Dianne Firth, Greg Somerville, Susan Matthews, Glennis Mann, Carolyn Sullivan, John Parkes, Anna Brown and Sue Cunningham.

In the final section of her talk, Judy took us through her artistic journey in textiles, her awards and the publications to which she has contributed. She started stitching with Noreen Dunn in the Cottage Quilters group in 1981. In 1985 they joined forces to start a business, Quiltek, and had a stall at the Craft Expos from 1985 to 1987. They both taught and sewed on consignment. Judy said she ‘concentrated on colour, Noreen on maths’.

Judy has always worked on series of quilts and showed us examples from every one of them. She started with her 1986 Double Homage series, inspired by Amish quilters, which marked the start of her career as a contemporary quilt maker. 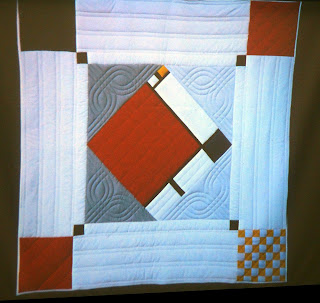 By 1993 her fascination with the log cabin series led to her first entry into USA’s Quilt National. 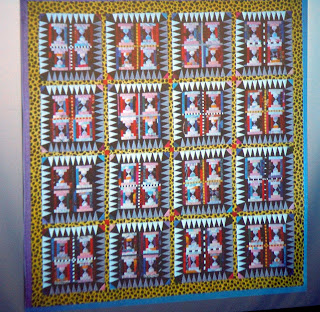 In 1995 and 1997, the red, white, yellow and black colours in road barriers sparked her ‘Urban Landscapes’ series. 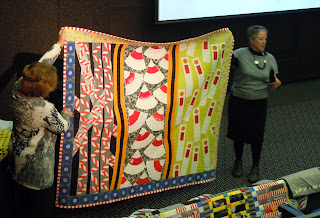 Her move from Terrey Hills to Morriset in 2004 led to the latest change in Judy’s work. As she initially had no studio or commercial fabrics to use, she started experimenting with plain white fabric torn into strips, layered, slashed and painted. 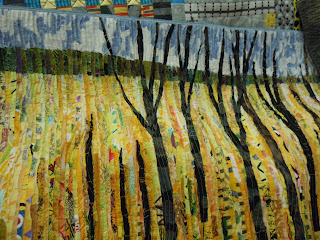 Her inspiration comes from nearby Dora Creek and she is now back to working with simple pieced and collaged quilts. When she lost her husband three years ago, she started work on her latest quilts – the Black Water series – which are hand painted, monoprinted, discharge-dyed and worked with oil pastels on the top of the fabrics. 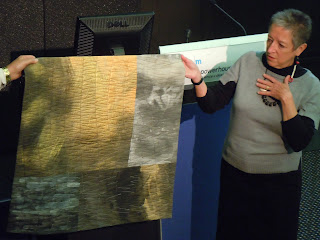