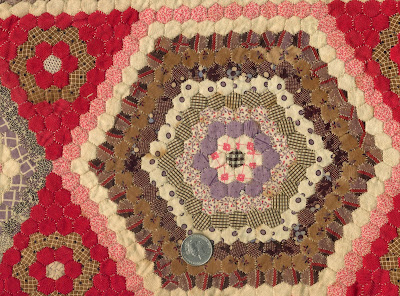 In 1994 the Quilt Study Group of Australia was formed by Margaret Rolfe AM in Canberra. The original committee was based and run in the ACT and was subsequently handed over to Annette Gero FRSA, who formed a committee to run it from NSW. Currently Karen Fail (former Quilters Guild of NSW president) is the convenor.

Since it began, the Quilt Study Group of Australia has worked as an independent body to further its aims ('to promote interest and research into quilting in Australia') by publicising quilting events around the country. Originally this was done via a newsletter but now it is done via this blog. In addition the QSG of A funds the running of a seminar every 2-3 years in different states of Australia. See http://australianquiltstudygroups.blogspot.com.au/p/the-quilt-study-group-of-australia.html for the full history of the group and details on how to apply for this funding to run future seminars.

To celebrate the 20th anniversary of the founding of the group, the Quilt Study Group of Australia will hold the next Seminar in Sydney, New South Wales. The Seminar will be on the weekend before the Sydney Quilt Show. On Sunday 15th June 2014 the Seminar itself will run, and it will be followed by a Quilts Uncovering day on Monday 16th of June 2014 . An interesting program of speakers is currently being developed and will be publicised soon. At the Uncoverings, the owners of four quilt collections will bring along their quilts to talk about and show us. There will also be a dinner on Sunday night, the first night of the seminar. As details become available, they will be published on this blog.

If you are interested in attending and would like details sent to you as they become available, please send your contacts details (name, contact phone number, address and email) to Karen Fail – karenvfail @gmail. com (remove the space before emailing) or 17 Peter Close, Hornsby Heights, 2077, Australia.
at 8:45 PM