Report on the Connecting Communities Seminar at the Powerhouse Discovery Centre

On the 12th of September 2012, the Powerhouse Museum's Discovery Centre presented a seminar which explored how the art of quilt-making and thread work has connected communities in times of need or remembrance. Dr Annette Gero, one of Australia's first and most respected quilt historians who has been documenting and collecting quilts since 1982, spoke about her latest research into military uniform quilts.
Dr Annette  Gero talked about a fine soldier's Crimean War patchwork,  circa 1870,  made from uniforms of the 90th Foot Regiment (British), which is in the Powerhouse collection,  Reference 98/48/1.  The information supplied with the quilt suggested it had been made in Tasmania by the soldier’s wives as British Crimean war veterans were given land in Tasmania in the 1860’s and many British Crimean war veterans families immigrated to Tasmania.
The quilt contains the following colours of uniform wool except for the blue, which is an slightly different fabric - red, yellow, black, green, and blue felted wools….. However these are not the colours of the uniforms of the 90th Foot Regiment.
So a search was on to find out which regiment this quilt came from. The quilt seemed to be made by one hand so it did not seem likely it was  made in Tasmania by many wives, but more likely, it was made earlier and perhaps brought to Australia with one of the Crimean War immigrant families. 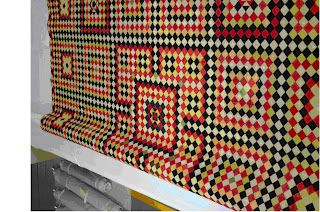 Annette showed photos of many fine Crimean war quilts some of which were in her own extensive collection.  The nearest match to the fabrics of the  Powerhouse quilt was a soldier's Crimean War patchwork, circa 1855, with embroidered and beadworked Regimental colours to the centre for the 37th Foot Regiment, within a mosaic of red, yellow, black, green and blue felted wools taken from uniforms, which  seem to be the closest match to the Powerhouse quilt.

Karen Fail then spoke about her most recent research into Aunt Clara's quilt and the maker's family. She uncovered the following information -

"Clara married Frank Picton Bate in 1884 when she was 25 and he was 39. At this time, Frank was farming his father’s property ‘Brookdale’ , a mixed farm near Blaney NSW.This property was lost to Frank after a questionable court decision over the title of the land which had been promised to the children of his father’s first marriage. Frank had worked the farm, hoping that this promise could be overcome in the courts.

Frank's adventurous spirit prior to meeting Clara is recorded in the Stockman’s Hall of Fame in Longreach, Qld. Prior to this research, we had believed that Clara had managed the guest house as Frank was little more than a bush carpenter.But the records in the Stockman's Hall of Fame reveal his true pioneering spirit. One year after the first crossing of the continent by Burke and Wills, Frank, with others, drove 2000 head of cattle from Bourke, New South Wales to Burketown, Queensland for Town's Station (he had worked for Towns in Sydney as a young lad) on the Gulf of Carpentaria-a trip of nine months' duration. He followed this with a second mob.
Frank continued droving and station work in north Queensland, mostly for Towns' stations until about 1872. Around 1870 he was contracted to carry mail from Mackay to Nebo with a packhorse and pistol. Once settled at Frankfort, Frank maintained contact with his family, particularly his sister, Nell and there are reported to be letters between them which are held by Margaret Hardwick, Frank Jr's cousin. My research continues and hopefully I will find the letters and maybe they will reveal more about  Aunt Clara's Quilt.
More information on the pattern used for Aunt Clara's quilt.
With many ladies magazines and other companies making embroidery and patchwork patterns available for women to use and share, we cannot really be sure where Clara found the unusual elongated hexagon block pattern from. However, Diagrams of Quilt Sofa and Pincushion Patterns included a block Grandmother's Dream which could be purchased for 10 cents from the Ladies Art Company in St Louis. 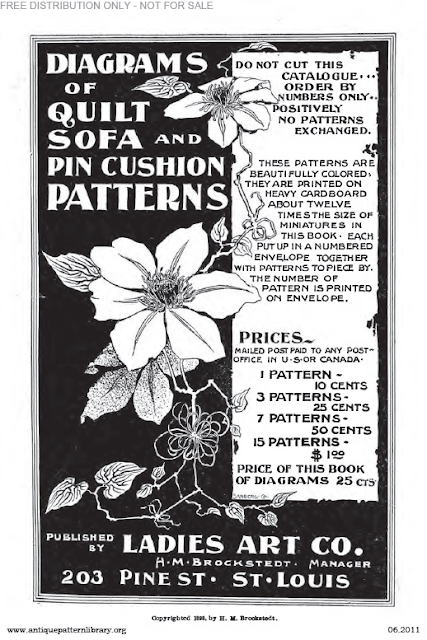 And perhaps she shared the block with another quilter in the area, Margery Harvey of Oberon NSW when she made her medallion quilt circa 1900 and used the elongated hexagon for one of her borders. The block is also listed in Caufields Dictionary of Needlework as Margaret Rolfe notes  in her book Patchwork Quilts of Australia but is unnamed."

The Powerhouse curator Christina Sumner showed one of their latest acquisition, an unusual petal or pocket quilt that was made in England around 1900. See http://www.powerhousemuseum.com/collection/database/?irn=422523&search=pocket+quilt&images=&c=&s= for a more detailed description of the quilt.

Here is a closeup of this fascinating quilt approved for publication on this site by Christina Sumner. 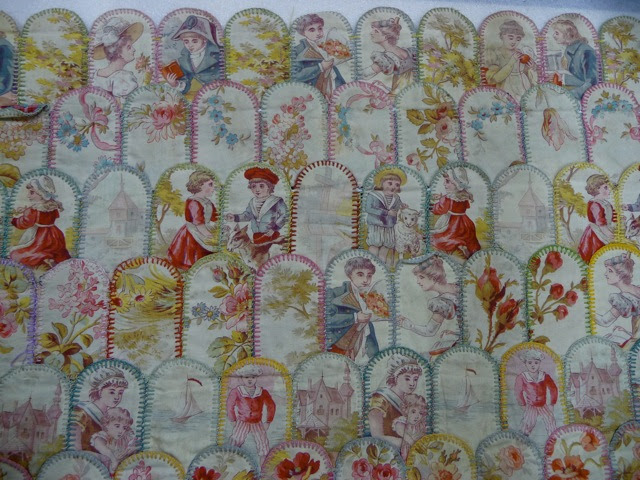 The documentation and care of the Australian AIDS memorial quilt was also discussed and selected panels were shown.
at 2:47 PM