On Saturday 15th of September 2012, Dianne Finnegan gave a wonderful presentation on the Soft Furnishings Project she has been leading since 2008 at Elizabeth Bay House in Sydney. Dianne was drawn to this project after health problems meant that she could no longer quilt. She has always been fascinated with the relationship people have to their quilts and other furnishings in their homes especially how these objects are used to denote wealth, status, taste, and notions of family. As well Jasper Morrison and Naoto Fukasawa’s notion of ‘super normal design’ (everyday objects that really make a difference in our living environment but don’t grab our attention) intrigues her. 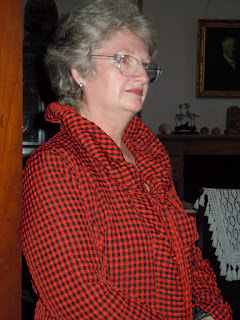 Dianne spoke of Alexander Macleay, the owner and builder of Elizabeth Bay House, his life and the house itself. She quoted from the diary of his unmarried daughter, Fanny, who provided the inspiration and model for how they have worked on this project. If an area of textiles cannot be seen, then a sewing machine is used.  If it is cold, then they move the table and chairs close to the open fire and if the light is low, then they move to the window for more light. At all times they have been mindful of budget restrictions. Their design inspiration has come from images in books of that time and the wonderful HHT’s Caroline Simpson library and research collection. 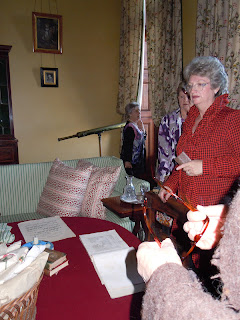 Dianne broke her talk into the different areas of the project they had worked on – the bed furnishings, hangings and coverings, the window dressings including Holland blinds, fringes and silk screens, and the other oddities they have been called upon to sew (skin rugs, baize table cloths, aprons for use by visiting school children and knitted doilies for the dining table). They are now investigating Berlin work, making linens to fill cupboards, and will start on making rag rugs for the house. They hope to soon start a similar soft furnishings project for Elizabeth Farm. 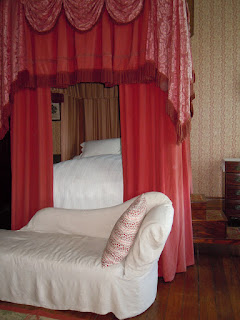 On her guided tour, Dianne spoke of the problems they will have in freezing a bale of hay to restuff one of the mattresses in the main upstairs bedroom. We also saw close up the problems her group of sewers worked through in making the bed hangings on the campaign bed. And we admired the beautiful knitted bed covers. 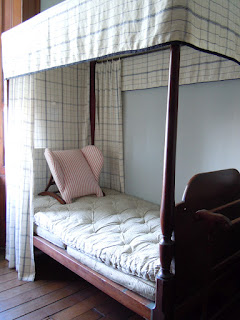 In the Drawing room, the curtains were last replaced in the 1980s so Dianne consulted her reference books to create ones in a more appropriate style. In the process they discovered that the original gilt pelmets had been sold to Old Government House so these were copied and replaced.  The bullion fringe was reused but a knitted fringe had to be made for the new curtains. They also made pleated silk screens for the piano and lining cupboards. 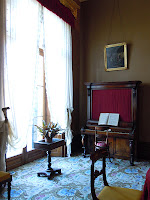 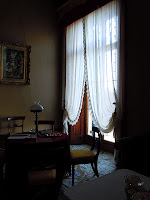 In the Dining room, because they could not afford lace curtains, Elizabeth Wright made a design for them to copy, which they then embroidered by hand – but only after their workmanship met Elizabeth’s exacting standards. 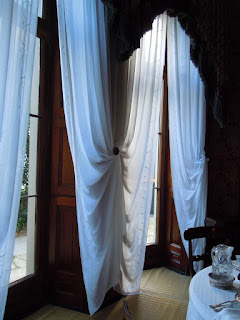