The seventh Quilt Study Group of Australia Seminar was held at the Immigration Museum in Melbourne on the 5th and 6th of November 2011 and was hosted by the Quilt Study Group Victoria. The QSGV convenor, Janet O’Dell, opened the seminar and gave an opening talk, standing in for the keynote speaker, Dr Annette Gero, who unfortunately was unable to attend.

Janet spoke about the Braddyll quilt she bought in 2008 in England. It is made from a variety of wonderful dress silks in the grandmother’s flower garden pattern with background hexagons of honey yellow silk and a rich purple border with a gold fringe.

It was made in 1842 by three sisters, the last in line of the once wealthy and prominent Braddyll family of Conishead Priory in Cumbria. We learnt of her fascinating research to date into the history of the family and the Priory, reaching back to the twelfth century.

Margaret Rolfe then presented Annette Gero’s planned talk, discussing the quilts inspired by, recreated or adapted from Annette’s book ‘Quilts: The Fabric of Society’ during a quilt challenge run by the Victorian Quilters in 2011.
We saw images of eight of the original quilts and were able to view in detail the quilts made by the prize winners, which were hung around the room.
For more details about the challenge, see http://www.victorianquilters.org/forms/VQFOSPP.pdf

Lynette Nilaweera then spoke about the Wool Quilt Prize and the National Wool Museum in Geelong. The collection started in 1983 in The Meat Market Craft Centre in North Melbourne as the “Running Stitch Collection” and was expanded in 1995 when a Melbourne Textile group approached the Museum to hold a competition. The collection has grown with the biennial acquisition of the winner of the only wool quilt prize awarded in Australia and New Zealand, and through the donation of quilts and waggas by owners and quilt makers. They also hold a number of wool sample books in their collection. The quilts in the collection were made from the 1890s to the present day. We were shown images of seven representative quilts in the collection and then were delighted to see images of the 2004, 2006, 2008 and 2010 prize winning quilts from the competition.
See http://www.geelongaustralia.com.au/nwm/ for more details of the Museum and the Prize.

The Martha Bergin quilt, currently on display in the Gold Rush section of the Melbourne Museum, was the subject of Margaret Rolfe’s talk. The centre of this wonderful 1843 Irish appliqué quilt is embroidered with Martha’s name, and the place it was made (Athlone) and the date it was made.

Margaret discussed the source of the chintz pieces that were broderie persed onto a white linen background, mentioning a possible link to Martha’s father’s drapery in Athlone, and similarities to another Irish quilt made around the same time in nearby Toomyvara. Margaret described how Martha Tipping née Bergin (1822–1883) came to Australia via America in 1846 at the time of the Great Irish Potato Famine and ventured into the gold fields of Victoria. It was wonderful to hear the story in the presence of her descendant, Dr Edmund Muirhead, and his wife who donated the quilt to the Melbourne Museum.

After lunch, Bronwyn Cosgrove detailed the conservation work undertaken on the 1840s Dickens Quilt by the National Gallery of Victoria. It was acquired by donation in 2007 and had spent years rolled up in a shed in country Victoria.  It is a wonderful coverlet of 16 frames made in cotton, glazed cotton, chintz, silk and wool and its condition posed serious challenges to restoring it to display quality. It had a large amount of mould, mildew, soiling, dye bleeding and iron mordant deterioration, along with rodent and silverfish damage. They estimated 30 to 35% of the fabric had been lost when it was brought in. Bronwyn took us through the five steps taken to clean, dry, stabilize and repair, then mount the quilt. The Gallery estimate that for the stitch stabilization period along, three conservators spent almost 600 hours working on the quilt. It was displayed in 2009 for four months but it is uncertain when next it will be on view. It is included in Annette Gero’s book “Quilts: The Fabric of Society” and can be viewed at http://www.ngv.vic.gov.au/col/work/80980

Two members of the Strathdate (Bendigo) Quilters Inc talked to us about their project to restore, research and document the 1895 Signature Quilt. It was brought to them in 2006 and contains 264 embroidered signatures of local men and women of the day (including prominent business people, local councillors, clergy, senators and MHRs, musicians, theatrical people and other community members). 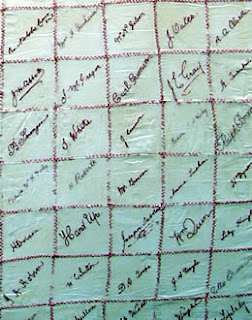 They took us through the history of Bendigo, especially during and after the gold rush. As the provenance is not certain, they believe the quilt was made as a fund raising item at the Golden City Fancy Fair in 1895 for the Sisters of Mercy Convent High School. We learnt of the history of some of those people who signed the blocks .

For more information, see http://www.bendigoweekly.com.au/news/quilt-needs-a-home
On Sunday, Alan Tremain started the day by showing some of the quilts, quilt tops and items he purchased when he travelled to USA using the Quilters’ Guild of NSW scholarship. He showed us some quilts from Gees Bend, feed sack quilts and individual quilt items and discussed their background in detail. We also saw his latest purchase, a hatchet block quilt, along with recent quilts and quilt tops he has made as educational samples.

You can see some of these items in the presentation Alan gave as part of his Guild Scholarship requirement on our blog at http://australianquiltstudygroups.blogspot.com/2010/11/9th-october-2010-talk-by-alan-tremain.html

Janet O’Dell started her talk, ‘Traditional Bed Turning of Selected pre-1850 Quilts and Coverlets’, by showing us the Maldon Crazy Quilt. It was won in a raffle around 1900 and is now owned by Sandra and Ken Jones, who were present for the talk.

It was made by Sarah Jackson née London, and consists of velvet and silk appliqué pieces outlined in gold threads. It has had new braid edging and backing added and is a wonderful crazy quilt that we all examined in great detail. You can read more about the maker at
http://livehistoryhobart.com.au/calling-all-you-quilters/

Janet then showed us part of her extensive collection of quilts, coverlets and quilt tops made in the UK, USA and Holland. She loves hexie quilts, star quilts and medallion (frame) quilts and this is reflected in her purchases over the years.

If you would like a copy of the seminar presentations, including photos and descriptions of Janet’s quilts, the Seminar CD costs $A10 including p. & p. within Australia. Please send orders and payment to:
QSGV
P O Box 120
Briar Hill
Vic 3088
Make cheques payable to Victorian Quilters Inc Quilt Study Group.
at 2:57 PM