Report on the 12th March 2011 Japanese Textiles: Then and Now talk

Our guest speaker was Lynn Hewitt who is a past President & long time member of the Quilters' Guild of NSW Inc. Lynn has been visiting Japan since 2002, when she and Jane Gibson were invited by the city of Nagoya to represent Sydney and the Quilters' Guild of NSW Inc at the International Quilt Fair. Since that first visit Lynn has been back 5 times, including twice as the tour leader for quilting tours. Apart from her own visits, Lynn's original interest began through her daughter, who learned Japanese and went there on a school exchange - thus beginning a series of return visits firstly by school children and then followed later by adults, a number of whom have become good friends with Lynn and her husband Ted. 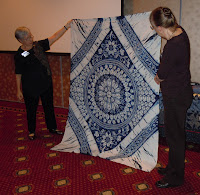 Lynn began her talk with a PowerPoint presentation showing a map of Japan to highlight the various areas where textiles are produced. As she progressed through the talk, Lynn described the different textile types and their production. She also explained the origin of the Kamon crest which we are so used to seeing in quilts today and how Sashiko was used to patch and mend garments. (A fireman’s outfit was made of many layers stitched together and when needed was doused with water to protect him from the fires).

After discussing design elements of Japanese textiles and how, for instance, different plants symbolise the different seasons ( Spring - plum and cherry blossom, Summer- iris & a flowing stream, Autumn-chrysanthemum and Winter - bamboo leaves), Lynn went on to tell us about Yuzen dyeing. She explained how it is done, how it can take up to 4 months for the design to be transferred, and the different elements painted - hence the high price to be paid for many of the beautiful Kimonos we see (that is unless you are lucky to get to a second hand market or a quilt show, where a number of people from the audience later told us they has picked them up for a song).  Lynn then spoke about how the indigo dye was produced and how some cloths are dyed up to 150 times to get the pattern and colour desired. She showed us examples of the different Shibori dyeing techniques as well as some images of amazing quilts made using indigo fabrics 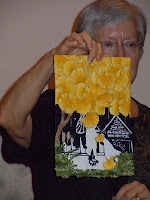 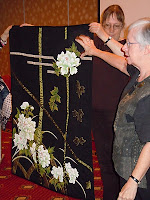 After her very informative talk Lynn showed many examples of the textiles she had described earlier. She then went on to show some of the quilts she has made using her Japanese fabric. Some of it was most unusual, one piece purported to be woven banana leaf, but she couldn’t actually confirm this as her Japanese didn't stretch that far. But it was an interesting piece to see! 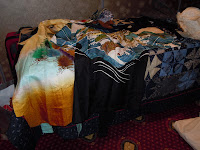 Following Lynn’s talk and her showcase there was a great ‘Show and Tell’ from the audience ranging from amazing fabrics picked up in the backstreets, kimono and yukata garments, and of course lovely quilts made from Japanese fabrics. 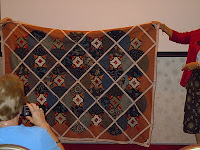 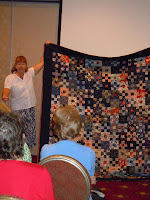 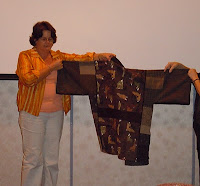 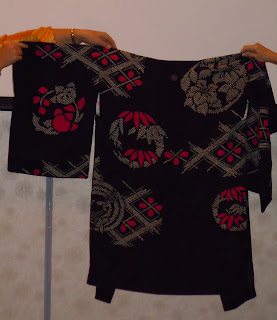 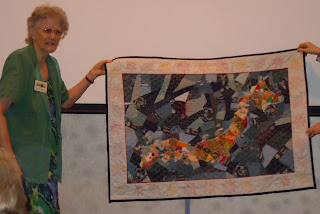 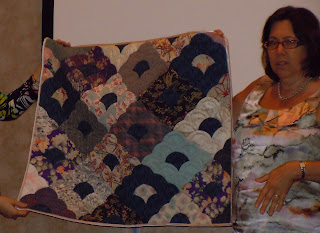 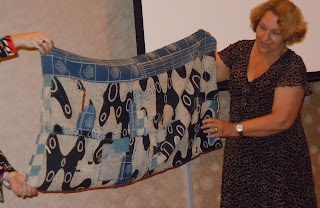