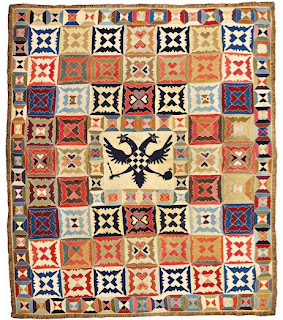 As winner of the 2009 Quilters’ Guild of NSW Inc. Scholarship, Annette Gero will be talking to us about her research in Berlin on Inlaid quilts at the Guild's December meeting at Burwood. Annette helped curate and learn from a major quilt exhibition in Berlin, which was the world’s first on woollen inlaid patchwork.

Inlaid patchwork quilts? Remember the 1776 quilt which Pam Holland reproduced? This quilt uses a technique little known today, but which was used 200 years ago. This technique is known as inlaid or Silesian piecing. The technique itself may be indicative of the origin of piecing.

You probably all know that Annette has acquired one of these quilts - the House of Commons Quilt (with all the people in the centre) - which was made by the same technique. Due to her ownership of this quilt, Annette was involved in the Berlin exhibition. She will show us slides of the other inlaid quilts that have been found and tell some of the amazing stories behind them. Some of these quilts are also in Annette’s book, 'The Fabric of Society', which will be on sale after the talk.

The talk will take place as part of the Guild meeting which starts at 1pm on Saturday, the 4th December 2010. The venue for the talk is the Burwood RSL, 96 Shaftsbury Avenue, Burwood, NSW.
at 7:25 PM